Day 20, one more to go! Today, I originally picked the following quest :

I choose a good sound that I thought I could use for the piece. And I created the arpeggio. Then, while listening to the arpeggio, my imagination expanded and I thought it may be fun to make this piece a song of Siren (or mermaid).  So, I changed my challenge to:

I did this on Day 5 already, I know. Before this 21days of VGM challenge, I didn’t post anything with Vocals on my website or SoundCloud (other than chorus). Every once in a while I received a request for a vocal song, and it has been on my to-do list.  So now I use this as a great opportunity to dive into it!

Once the instruments were done, I started to record my voice.  Then, this time I used “Melodyne Essentials” to shape the pitch better. 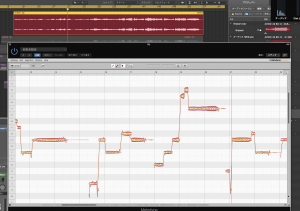 This is the first time using Melodyne for me. To be honest, I totally forgot that I had it! (It came with Studio One 3…or maybe 2…so, I got it for free!) It was very easy to use, a little CPU heavy I thought… but it was easy to use…

… Then, it happened. Melodyne crashed my DAW.  But hey, one of the BEST things about Logic Pro X is that when the DAW crashes, it saves the previous state and most of the times it recovers it. No more screaming desperately because you just lost hours of work just because you forgot to hit command+S for a while…!  But I said, most of the times.  Well this time… maybe because it was Melodyne that crashed the DAW…when I opened Logic Pro X, I found that all the recorded voices were magically gone.

Hm, it sucks, yeah. I thought one of the tracks was actually pretty decent! I thought I’m almost done! But ah well.

So… I re-recorded my voice again.  It’s just my feeling but I felt like this recording was not as good as the previous ones (I could be totally wrong!).  But I had very little time left, I had to go with it. I edited the re-recorded voice with Melodyne CAREFULLY (with lots of command+s), and boom! Here is the outcome :

Let me know your thoughts!